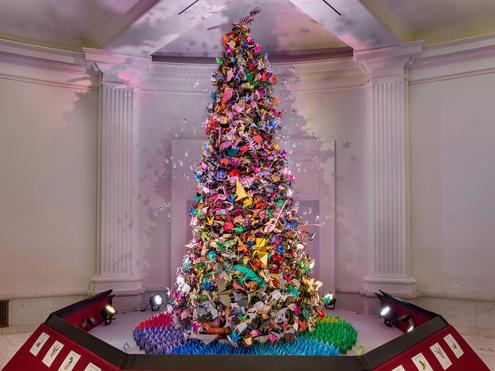 The theme of this year’s 13-foot tree is Beautiful Bugs, featuring specially created models inspired by the upcoming Susan and Peter J. Solomon Family Insectarium opening in Winter 2023 as part of the Museum’s new Richard Gilder Center for Science, Education, and Innovation. Among the more than 1,000 origami pieces decorating the tree will be intricately designed models of long-legged grasshoppers, brilliantly colored butterflies, and iridescent beetles, as well as those depicting iconic Museum exhibits like the Blue Whale and Tyrannosaurus rex. Produced in partnership with OrigamiUSA, the Origami Holiday Tree is delightfully decorated with hand-folded paper models created by local, national, and international origami artists.
Please help us keep this calendar up to date! If this activity is sold out, canceled, or otherwise needs alteration, email mindy@kidsoutandabout.com so we can update it immediately.

Learn more about the making of the Origami Holiday Tree and find out how to make your own origami models!

All Ages Adults & kids together Adults without kids